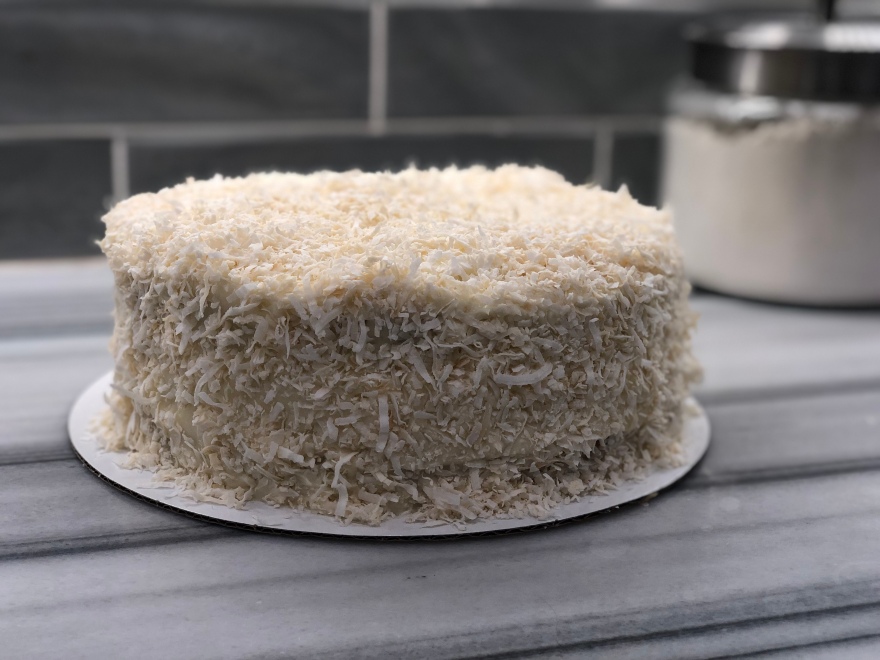 Isabel wanted a Coconut Cake for her birthday.  Or did Maddie want one for Isabel’s birthday?  I doesn’t matter. A Coconut Cake was born. I worked with this recipe.

Preheat oven to 350 degrees. Butter 3 9-inch round cake pans and line bottom of each with a round of parchment paper, butter parchment paper and set pans aside.

Sift cake flour into a large mixing bowl, then add baking powder and salt and whisk mixture. In the bowl of an electric stand mixer, fitted with the paddle attachment, blend together granulated sugar, butter and canola oil on medium speed until well combined. Scrape down bowl.

Add in egg yolks one at a time and mix until combined after each addition (reserve 2 egg whites), then mix in coconut and vanilla extracts. Scrape down bowl.

In a separate mixing bowl, using an electric hand mixer, whip 6 egg whites with cream of tartar on medium-high speed until stiff (but not dry) peaks form.
Using a rubber spatula, carefully fold 1/3 of the egg whites into cake batter at a time and fold just combined after each addition (don’t over-mix and deflate egg whites).
Divide batter among prepared cake pans. Spread batter into an even layer and bake in preheated oven until toothpick inserted into center of cake comes out clean, about 19 – 22 minutes.
Allow to cool in cake pan 5 – 10 minutes then run a knife along edges of cakes and invert each onto a wire rack to cool. Cool completely the cut tops to even as needed.
For the Coconut Cream Cheese Frosting:
In the bowl of an electric stand mixer fitted with the paddle attachment, whip butter with cream cheese until smooth and fluffy. Mix in coconut extract. Add powdered sugar and whip on medium speed until smooth and fluffy.
Chill as needed if frosting seems runny (slightly runny is fine, once you get it frosted the coconut will help it stay in place).
Frost top of one layer, add another layer and frost then top with last layer and frost top and sides. Place cake stand over a rimmed baking sheet and sprinkle cake evenly with shredded coconut (pressing gently on sides to adhere).  I refrigerated it overnight but then left it out.