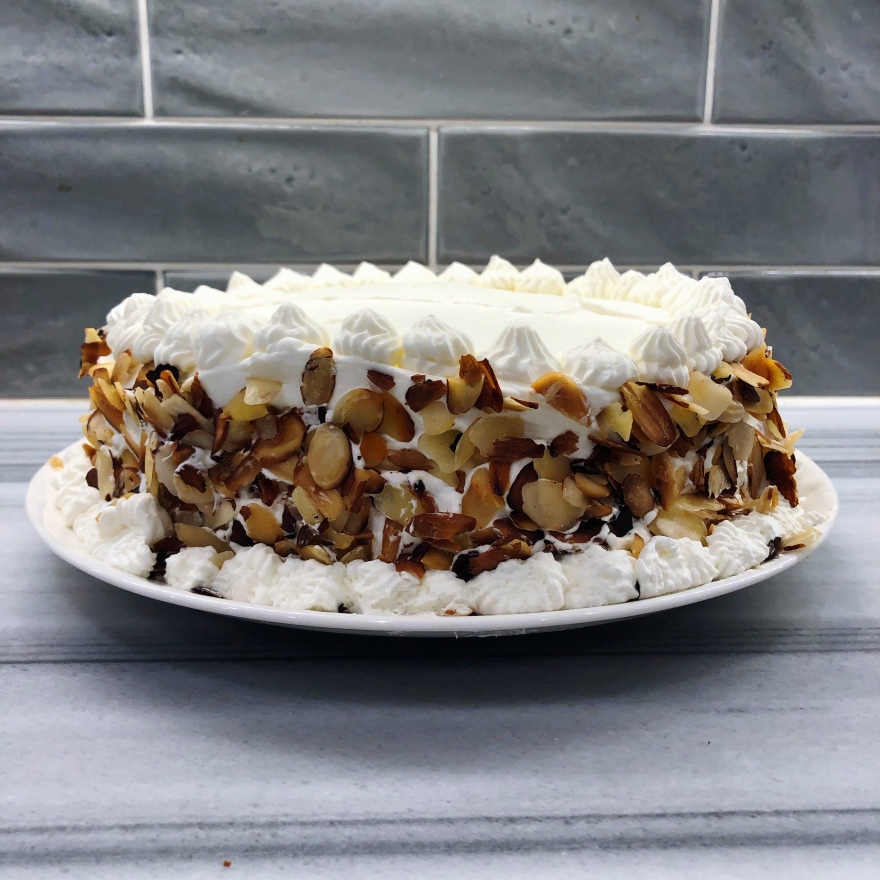 I reprinted the recipe from Living the Pie Life who reprinted it from Diana’s Desserts. But make sure you follow the first link if you have any questions.

Whisk together 3 egg yolks with 1/2 cup of the whole milk.

Sift 3 tablespoons of flour into the egg mixture and whisk to combine taking care to eliminate any lumps.

Add 3 tablespoons of sugar and a large pinch of kosher salt into the mixture and stir to combine.

Scald (aka bring just to a boil and then cut the heat) 1 1/2 cups of whole milk in a small saucepan. Let the milk cool slightly because you are about to add it to the eggs and you don’t want to cook them in the bowl.

While whisking continuously, add the scalded milk into the egg mixture.

Pour all this back into the pan and bring slowly bring to a low simmer, whisking the whole time.

Whisk while simmering for 2 minutes. It will become quite thick.

Remove from the heat and stir in 1 teaspoon of vanilla and 1 tablespoon of unsalted butter.

Transfer to a small bowl, cover with plastic wrap that touches the surface of the liquid (to avoid a skin) and refrigerate for at least 4 hours or overnight.

Chocolate Pastry Cream
The process for the chocolate cream is the same, except that you used 1/4 cup of sugar and add 2 ounces of finely chopped unsweetened chocolate with the vanilla and the unsalted butter at the end.

Mix together the water, sugar, and rum in a small pot. Bring to a boil, and stir until the sugar is dissolved. Remove from the heat and cool before using.

Italian Sponge
Preheat oven to 375 degrees F. Butter two 8-inch cake pans then line the bottom of each with parchment. Butter again and then flour the entire interior. Note: Its totally worth it to go through all these steps. Your cake will never stick. Set aside.Place egg yolks and sugar in a mixing bowl and beat until lemon colored. They will be quite thick. Add the vanilla and the lemon rind.In a separate bowl, beat egg whites until stiff but not dry. Gently stir a third of the egg whites into the egg yolk mixture. Sift flour over that mixture and then fold it in, very gently, until just incorporated then add the remaining egg whites and fold, again, until just incorporated. Your goal is to keep as much of the air as possible in the batter.Pour cake batter into prepared pans and bake in preheated oven for 22-24 minutes (NOT the 4o minutes in the original recipe), or until toothpick inserted in center comes out clean.  Remove cakes from oven, let them sit for about 5 minutes in the pans and turn the cake out of pans onto wire racks to cool completely (if they are a little stuck to the side of the pan, just run a knife around the edge of the pan before turning them out).

Stablized Whipped Cream
Soak plain gelatin in cold water for 5 minutes. Dissolve by placing it in a container over a small pot of simmering water (or in the microwave for 10 seconds on low), stir until dissolved. Set aside to cool slightly before using.In a large well chilled bowl, with well chilled beaters, beat cream with electric mixer. Just before it becomes soft and billowy, slowly add the sugar and vanilla to the whipped cream at the sides of the bowl, continue to whip as you do. Whip the cream until you just begin to see waves in the cream.Then, while continuing to mix, add melted and cooled gelatin. Stop whipping when cream forms soft peaks. Finish beating with whisk to adjust consistency to stiff peaks.Use or serve immediately or cover and refrigerate until needed.If peaks have softened during refrigeration, re-whip by hand using a whisk.

OK. I messed up while I was assembling this cake. Everything was going OK until I got to the chocolate pastry cream layer and the weight of all that cream and cake make the vanilla pastry cream start to squeeze out of the sides of the cake. That’s when I remembered that I had an 8-inch cake ring and placed it over the finished cake and then put the cake in the freezer 20 minutes to get a hold of itself. If you have a cake ring or an 8-inch springform pan, I recommend assembling the cake within the ring.  Alternatively, you could refrigerate or freeze the cake for 20-30 minutes halfway through the assembly process to allow the pastry cream to firm up again.Ideally, this is how the assembly should go:

You are going to cut the sponge cakes in half (horizontally) to form two layers. This is how. Using a long, thin bladed knife, cut/split each layer in half lengthwise making four thin layers (each of my 4 layers was about 1/2-inch thick).

Place bottom sponge layer on platter cut side up, sprinkle/brush with about 1/4 of the rum syrup (be careful not to get the cake too wet, or layers will become soggy).

Spread a layer of vanilla pastry cream on the first sponge layer.

Top the vanilla cream layer with another layer of sponge cake, cut side up. Sprinkle with another 1/4 of the rum syrup.

Spread a layer of stabilized whipped cream on the second sponge layer.

Top the whipped cream layer with another layer of sponge cake, cut side up, sprinkle with another 1/4 of the syrup. Note: You may want to refrigerate the cake for 30 minutes at this point.

Spread a layer of chocolate pastry cream on the third sponge layer.

Sprinkle the remaining rum on the cut side of the last layer of sponge.

Top the chocolate layer with the last layer of sponge cake, right side up (aka cut, rum syrup soaked side down)